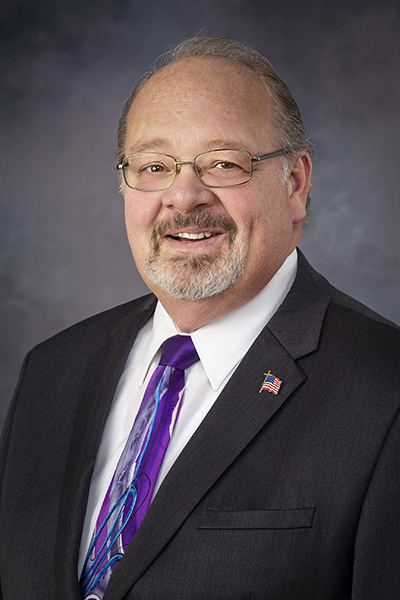 Keith Mills was born on October 17, 1968 in Twin Falls, ID, to Justin and Ruth Mills, the youngest of five children.  Keith has three brothers, Randy, Butch, the late Devon, and his sister Cheryl.  Keith grew up on the family farm outside Hollister, ID.  The rural elementary school had about 50 students enrolled through sixth grade.  High school was spent in th eneighboring town of Filer where Keith participated in almost every sport; football, basketball, track and rodeo.  In 1987, he graduated from Filer High School.  Congressman Stallings was instrumental in Keith receiving an appointment to the United States Military Academy at West Point for academics and football.  Unfortunately, an injury meant Keith returned home in 1989 where he attended the College of Southern Idaho and met Amy Jane Rutherford, his best friend and true love.  They both received their Associates Degree.  They were married in 1990 and Keith transferred to University of Idaho where he received his Bachelor’s Degree in Electrical Engineering.

For over 31 years Amy has encouraged and supported his dreams.  Keith and AMy have two children; Cassie has 2 boys, Clark and Karson, and is attending nursing school.  Their son Justin, who is a senior at Boise State University, will be graduating with a Bachelor’s Degree in Business.

Growing up on a farm, Keith developed a strong work ethic and as he grew older, the value of a hard day’s work.  His family farmed 350 acres and operated a Custom Farming business. They also raised prize winning Duroc hogs for breeding with Keith showed in 4-H and Future Farmers of America, as well as sold breeding stock across the United States.

After college his career began and Applied Materials where h worked for more that 10 years in the Semiconductor Industry with extensive travel in the United States, Asia and Europe.

Keith returned to Twin Falls to be with family where he owner and operated several construction and trucking companies.  Keith currently works as the Director for a County Highway District.

In 1990, Keith was proposed for membership by his Father and initiated as a Member of Twin Falls, ID Elks Lodge No. 1183.  He continued his membership there all through college.  Upon graduation, they moved to Nampa, just down the street from his brother Devon.  With Devon already and Elks Member, Keith transferred his membership to Caldwell Lodge No. 1448 where hs is still involved today.

Keith began as Tiler for the Twin Falls Elks Lodge for two years before leaving for college, then, upon his transfer to Caldwell in 1994, was appointed Inner Guard and installed in 1995 and progressed through every officer chair, serving as Exalted Ruler 2001-2002.  He then served the next five years on the Board of Trustees, with the last as Chairman.  Keith was a member of five Idaho State Champion Ritual teams, each competing at Grand Lodge.  He is excellent at performing the ritual and is a six-time State All-American.  Deith has been recognized for his outstanding dedication to Caldwell Lodge multiple times.  In 2008, he was voted Caldwell’s “Elk of the Year,” as well as, Idaho Stat’s “Elk of the Year.”  Keith has the distinguished honor of being the first ever to be elected to Honorary Life Membership to Caldwell Lodge No. 1448.

Keith was elected and served three years as Idaho Vice President south, subsequently being elected and serving as Idaho State President in 2006-2007.  The next six years were on the Idaho state major project, the Idaho Elks Rehabilitation Hospital Board with the last two years as Chairman.  In 2016, he was inducted in the “Idaho Elks Hall of Honor.”  He continues to serve the Idaho State Association and is on the Advisory Committee with the Past State Presidents.

Keith’s service to the Grand Lodge has included two terms as District Deputy for Idaho South District and then served six yeas as a Special Representative for various Lodges in Idaho.  During his time, Keith also served a Idaho State Hoop Shoot Chairman for 18 years and Northwest Regional Director from 2011 to 2016.  The region included Idaho, Oregon, Washington and Alaska.  Keith and Amy truly enjoyed being with the children, watching them grow and getting to know the families.  He was appointed Senior Special Representative for Idaho and Oregon in 2019 and continues to serve in both positions.

At the 2016 Grand Lodge Convention, Keith was elected to a four-year term on the Board of Grand Trustees, subsequently serving as Building Applications-West Member, Approving Member, Secretary, and most recently as Chairman.  in 2020, he was appointed Oregon Special Deputy Grand Exalted Ruler.

The passion Keith has for our Fraternal Order is shown by his enthusiasm, commitment and devotion.