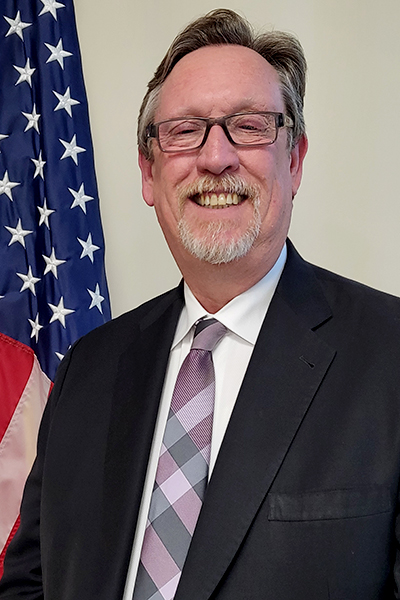 Allen Bisbee was born on August 12, 1964 and grew up in Anaheim, California. After graduating from High School Allen got his first job, working as a Day Porter at Brunswick Orange Bowl. It was during this time that Allen decided he wanted a more stable career, and he decided to enroll in the Mortuary Science Program at Cypress College. Upon completion of his Mortuary Science Education in 1987 Allen would begin what is now a 35 year, and counting, Funeral Service career.

Several years later Allen joined the Anaheim Moose Lodge where one particular Karaoke Night he was introduced to Maria, and just a few months later they started dating. Allen moved to Tustin in 2010 and became a member of Santa Ana Elks Lodge #794 in March of 2013, following in the footsteps of his grandfather, Robert Swinhart, Past Exalted Ruler of the Fullerton Elks Lodge #1993. In spite of only being an Elk member for 8 months, Allen was asked to join the Officer Corps as Inner Guard, and began his journey through the chairs.

Allen became Exalted Ruler in 2018-2019 right when the lodge was undergoing their transition to a new Lodge. Allen was instrumental in locating the temporary lodge in Downtown Santa Ana for the membership, while their brand new 52,000 sq. foot state of the art building was being built. Many challenges were faced at this 3,000 sq. foot location called the “Nest”, but Allen and Maria managed to keep the membership together and at the same time be a +1 Lodge.

Allen and Maria got Married in December of 2017 and after the wedding they went to the Santa Ana Lodge, in Full Wedding Attire, to celebrate with their Elk Family. Between the two of them they have three children Krista, Richard, and Stephanie, and five Grandchildren Nolan, Jaycion, DeVaughn, Zoey, and Richard Jr.